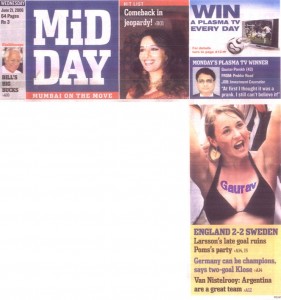 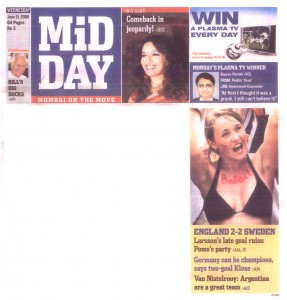 As I was unable to go at 11 am for a photo shoot at their Parel Office, I send them my standard serious (wife thinks Glum ) face passport size colour photo by email… and I suppose all of you will say that a Wife is always right ! read more

We are a Football Crazy Family… Son played in the Team that won the Inter School Gold for the first time in it’s 145 year history a few years ago…. My daughter is the State Goalkeeper  and has been shortlisted as a Core Probable for the Second Camp for the selection of the India Girls u-16 National Football Team…. my wife is a great and loyal cheerleader and i have captained my school team, played in the Goal and also played for my college team… till a year ago, I had assumed the role of a voiceferous defacto Coach at my daughters inter school matches, running up and down the lines, screaming at the girls to pass, shoot, centre, clear….. Both kids love Liverpool and Gerrard and Torres… I love Brazil and Kaka…. we are all looking forward to a mesmerising Messi and a Racing Rooney regaling us with Goals at the FIFA World Cup that begins this Friday

Hey ! and check out this superb FIFA World Cup Match Schedule link… a lovely way to display the Schedule in June and July

Host Nation, South Africa kicks off the World Cup by playing Mexico in the Opening Match this Friday, June 11, 2010 in Johannesburg

The Finals will be played on Sunday, July 11, 2010… again in Johannesburg… it will be the 64th and Final Match in this World Cup

Suspended IPL Chairman, Lalit Modi had boasted that the IPL will be a bigger Brand and Event than even the FIFA World Cup !… Modi, Go Fly ‘Kites’ with Hritik Roshan and Barbara Mori !… Cricket is played by less than 30 Nations…. Football by over 200 !… IPL never excited me !… FIFA World Cup excitement has never left me !

I’m really excited about FIFA World Cup… so what if India has never qualified yet… I yet remember the magic of  Maradona, Socrates, Rummeneiger and Paulo Rossi in the 1970s and 1980s and the harmless betting we did between us in the Middle East Nation Office of a Big Four Auditing Firm during the 1986 World Cup in Mexico

Have Strong Memories of the controversial ‘Hand of God’ Goal scored by Diego Maradona for Argentina against England in the quarterfinals of the 1986 World Cup… Maradona unfairly used his hand to score the Goal… the referee did not see this and allowed the Goal…. Argentina won the match 2-1 and went on to beat Germany in the Finals to lift the Trophy…. but it was Maradona’s second goal in this match v/s England that was voted in 2002 as the Goal of the Century… he magically dribbled past six England Players to score….. he’s going to be there too this World Cup, as the coach of the Argentina Team read more