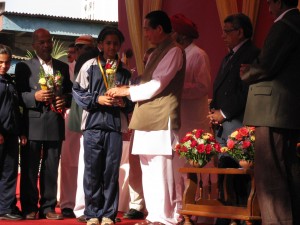 Our daughter being felicitated by the Governor of Maharashtra,Mr S C Jamir

Here she is performing the Split,before which she had walked and rotated on Handstands,thus displaying her Gymnastics skills too,before the Governor.This was the concluding part of a short cultural performance that the whole State team had put up in the Chennai Nationals too and for which they had won top honours 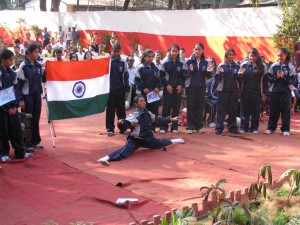 We had gone to Chennai end December 2008 to cheer our daughter…she was the Goalkeeper of the Maharashtra Girls u-14 Football Team….There were 19 states and over 300 girls and our State Team came Runners-Up….Chennai was a great experience for all of us…I’ve blogged on this trip earlier

The Girls were awarded medals on January 7,2009 by the Western India Football Association (WIFA)

And yesterday,March 3,2009,the Governor of Maharashtra,Mr S C Jamir, felicitated them yet again at the Cooperage in a lovely function organised by WIFA…They were presented Lovely Mementoes and their AIFF Certificates too and WIFA announced an Award of Rs One Lakh for the Team !

In a Lively Speech straight from his heart,Mr Jamir revealed that he was a great fan of Football and Boxing and himself played Competitive Football when he was younger….He believed that only selection purely on merit and great coaching can take India up the World Football Ladder…He urged the Girls to continue to show passion,dedication,discipline and not miss any Training Sessions and applauded them for the laurels they had brought the State…He was more Happier than all of them ,he said !…He recalled how the legendary Pele was spotted and how he never missed any Training Session…His Mother had send him to buy Apples….He was carrying them on his head and one fell off…he balanced that one apple on his leg all the way home ! A Football Coach spotted him from a Window and said that this Man will go on to become a Great Football Player….Mr Jamir recalled how a Team Manager had put his own son into the Team against the visiting Dynamo Team…Mr Jamir was livid…he got this Boy recalled and send in another talented player,Shyam Thapa….Thapa immediately scored a Goal !…If you want to Win,then selection must be done on merit,he emphasised