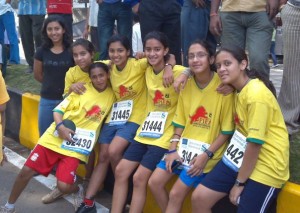 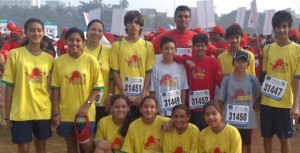 My daughter (in red shorts in first photo and sitting second from right in the second) ‘ran’ the Dream Run of 6 km to 7 km with the PIFA …..a Football Academy and a Dynamic Enterprise run by Dynamic Anjali and Nirvan Shah, whose Goal is to Have India qualify for the FIFA World Cup in 2022 !…These kids have exceptional Energy levels….It’s been a hectic weekend for my daughter…Yesterday,she was away the whole day, competing at the State Gymnastics Tournament at the Andheri Sports Complex in Suburban Mumbai from 7 am till 8.30 pm……then joined around 40 of us at 9.30 pm till past midnight for a Victory Football Dinner for the Runner-Up Maharashtra State Girls u-14 Football Team at the Chennai Nationals,of which she was a Goalkeeper Member…Now after the Dream Run,she’s off this evening,to participate in a Gymnastics Demo at a Cricket Function at the Police Gymkhana on the Marine Drive Sea face…Phew ! Sitting at Home,I’m tired for her !   read more