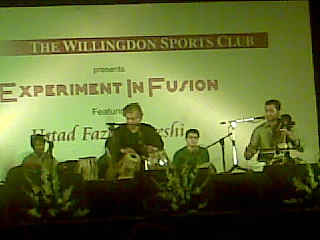 For me,two pieces stood out…the initial jugalbandi that set up the Evening….between Ustad Fazal Querishi on the Tabla and Sabir Khan on the Sarangi…Fabulous….and later the Percussion Fusion between the Drums,Mridangam,Tabla and Dholak…the Rhythm got to you….For Me the Sound System was quite good,though there was a faint hum on stage…and Ustad Fazal Qureshi confessed that they had not reckoned with the Dew..it was causing some Tuning Issues….I just could not make this out…as his Fingers rolled over and played the Tabla,the sound reverberated quite ‘kadak’ and brilliantly….if ever they did miss a beat,It missed me ! read more