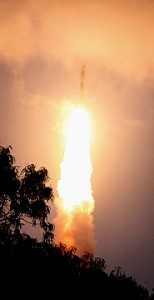 Congratulations to all of India and especially the Scientist Teams of ISRO for the successful launch of Chandrayaan-1, India’s first unmanned space ship to the Moon

Despite a very late night, having first attended a BSE Dinner in honour of the 41 International Participants from 20 Countries in Mumbai for a weeklong training programme  and then catching up with relatives at a pre-diwali get-together and finally rushing off for Siddhi Vinayak Darshan, it being a Tuesday, was excited enough to get up early at 5.30 am this morning….. send sms to friends and family to watch live at 6.20 am the launch of India’s Rocket PSLV bearing our first unmanned space ship to the Moon, Chandrayaan-1

What a sight !.. on cue at 6.20 am was the lift off from the Satish Dhawan Space Centre in Sriharikota and most news channels were showing it live with minute technical details too being provided

In Five and a half days, Chadrayaan-1 will enter the Lunar Orbit,387500 kms above Earth and then ten days later will fire an impact probe to the lunar surface… An Indian Tricolour will be hoisted on the Moon…. India will be only the fourth nation to do so.

It’s a two year mission for the Chandrayaan-1… It’s camera will take photos and 3-D map the moon from just a  Five meter distance… Among other experiments, there will be a search for any evidence of Water and Helium 3. The Spaceship is carrying eleven payloads from India, Europe, USA and Bulgaria

ISRO’s Chairman, Mr Madhavan Nair, now plans a manned mission to the moon by 2015… ten years ahead of an earlier target of 2025