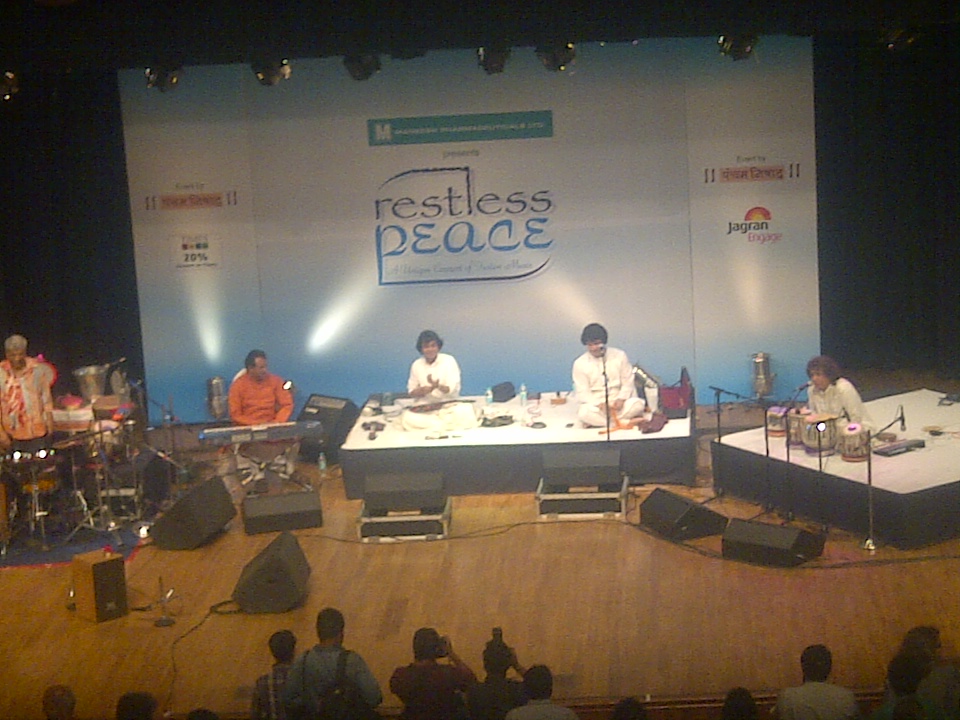 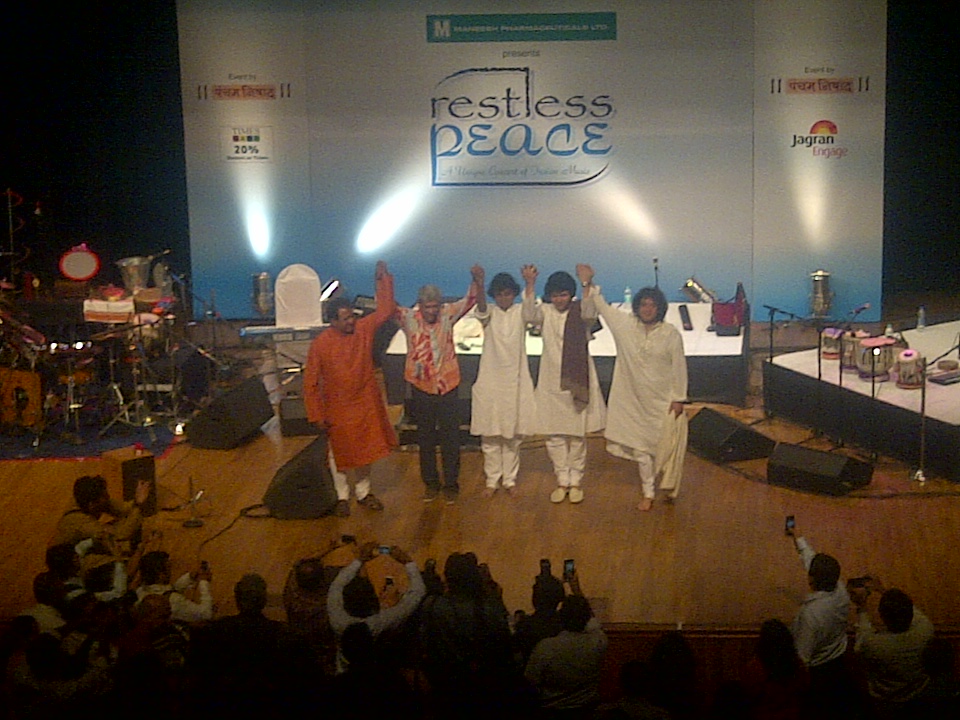 Markets may be Freaking all out but Thursday night’s Fusion Concert ‘Restless Peace’ with Zakir Hussain on the Tabla,Trilok Gurtu on Drums and what all !,U Srinivas on the Mandolin ,Rakesh Chaurasia on the Flute and Ajay Joglekar on the Harmonium and Keyboard freaked us all out

‘Restless Peace’…what an interesting name to define Fusion Music ! It was a hop,skip and jump from my office at Shanmukhananda Hall in Matunga…8 pm to 10 pm non stop on Thursday Night,December 8,2011

Trilok Gurtu on the Drums and various Percussion Adaptations was simply in his element…Flamboyant Zakir demonstrated why he remains unrivalled on the Tabla…U Srinivas was mesmerising on the mandolin … Rakesh Chaurasia,nephew of Hariprasad Chaurasia was quite good on the Flute and Ajay Joglekar complemented well on the Harmonium and Keyboard

The Solo’s were outstanding and when Trilok entertained us with some fabulous percussion variations on a Stainless Steel Bucket filled with water or just tapping on a loud speaker in a jugalbandi with Zakir on the Tabla,we were screaming for more

…and when these Musician Maestros in sequence echoed Rakesh’s Flute on the Theme from Clint Eastwood’s “The Good,the Bad and the Ugly’ and even James Bond we were delighted…they played ‘Lotus Feet’ which is a soothing ‘Shakti ‘ Track that had us spellbound

…was with Friends…they thought I was asleep in the first hour !….I was actually in a spellbound trance !

Zakir Hussain is the elder son of the legendary Tabla Ustad the late Ustad Allah Rakah Khan….his brothers Taufiq and Fazal Qureshi too are Ustads in their own right…In fact earlier in the year had attended and interacted with Fazal at his Fusion Concert at the Club in February 2011…both Taufiq and Fazal were with me in school

Connected after ages with Ustad Fazal Qureshi & his Experiment with Fusion

…then at 10.15 pm we moved from Fusion to No Fusion Food !….it had to be Madras Cafe at Matunga….the popular,actually legendary South Indian Udipi was packed at this fairly late hour on a weeknight…Vada in Sambhar followed by Raagi Masala Dosa with their in house white butter and Mulga Pudi Powder with Oil and  then a lovely Bisibele Baath…Ooooh !…perfect Meal ending with two stainless steel glasses of  perfect Kadak Filter Coffee..the second one really Kadak !..and a perfect tab…whole of Rs 289 for the four of us,with each having two dishes each atleast ! read more