Will not reveal what’s in these right now …Let them be surprised….what I will reveal is they weigh over 7 kgs each and are loaded with @ 20 Brands & 35 items !~ @ twice more than last year ! ( perhaps a way of apologising for the delay in announcing 2016 winner and therefore the delay in despatch ~ come on guys there were 100+ entries to study !)

Bhanu Kiran Polanki won retro for 2015  for recommending Vidhi Dyestuff beginning 2015 at Rs 17 and which rocketed a brilliant 347% to Rs 76.65  at December year end 2015 and even today holds at Rs 70 levels…It zoomed higher than Intellect Design which too did brilliantly in 2015 & which I had selected beginning 2015 as the TAP GAP 2015 Winner…Spicejet & Intrasoft (late entry beyond deadline) which too did well in 2015  had missed out

Pushkar Singh Rana wins it for recommending Kaveri Seeds at Rs 325 beginning of 2016.It’s my TAP GAP choice from a record of over 100 Entries

Just as Bhanu Kiran Polanki won retro for 2015 even at 2016 Year end we will see another hamper being awarded to the participant whose entry from the over 100 entries recommended  for 2016 has gained the highest as long as it’s not Kaveri Seeds!

Both Bhanu & Pushkar have expressed delight…am truly happy their families and they are enjoying the contents as below…maybe we should have another TAP GAP Contest mid year 2016  with more winners & more hampers !…Cheers ! 😆 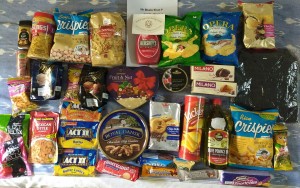