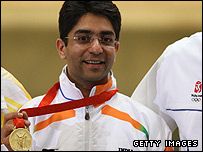 …and so I began the Day a little late at 9 am with tears in My Eyes to witness Live our Shooter, ABHINAV BINDRA win India’s first ever Individual OLYMPIC GOLD ever in Beijing… He won in the 10m Rifle Event on the third Day of the Olympics…. Our National Anthem being played and our Tri colour going up was simply overwhelming… I was standing when “Jana Gana Mana” began playing and I was Crying… the Chinese was crying on the Podium… but Bindra was calm and composed and only allowed himself a shy smile… the Moment is indescribable

And how did Bindra do it !…. he was joint third going into the Final Round of Ten Shots, the  Finn was in the lead by over Two Points… Bindra was never in the lead….. At the Ninth Shot the Chinese and Bindra were tied and then the Chinese shot a very good 10.2…..Every Indian was holding his Breath as Bindra readied to shoot the last shot….. and believe it or not he shot the best of the day… 10.8 to snatch Gold  on the last shot  scoring a Final Score of 700.5 ! with the desolate Chinese taking Silver and the Finn, the Bronze

The Best and Most touching outpourings came from Bindra’s Mother… she was simply over the moon.. she said she messaged him at 4 am in the Morning saying “Mama knows you can do it… you know you can do it…so just go and do it !”

It’s a Proud Moment for all Indians… It’s proud to be an Indian !…. It’s as if each of us has won the Gold !

Hopefully now Cricket will not dominate sports in India and corner Major Sponsorships and Funds…. India is trying to save the Test Series in Sri Lanka right now….. Other Games will now rightfully come into the limelight and deservingly get their place in the Sun too!

Post win on questions being shot at him by the Indian media, as fast as his rifle shots too, Bindra showed his maturity… his dedication to his family…. his sense of humour… his spirit…. his views were assertive and firm… Snatches of his answers are below

Abhinav, your OLYMPIC GOLD is the Overshadowing Sunlight on A day when Rain, Political and Religious Issues, some major Tragic Accidents and our Cricketers are  all playing Havoc with us