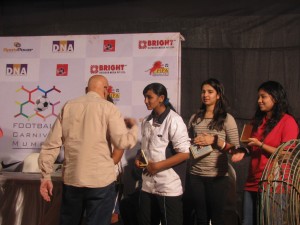 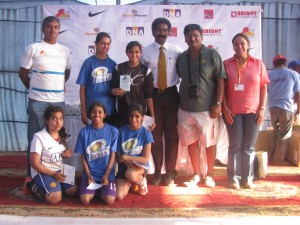 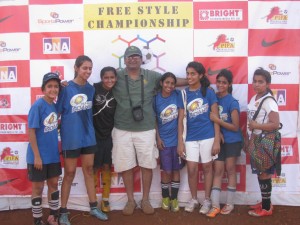 ….. and I was impressed by Amruta Kharkhanis the Sports Psychologist…she even gave a small pep talk to our Girls before the finals…I think that did the trick !…she told the girls not to be focussed or worry on  the outcome and not to remember what happened in previous matches…just go out and play football….earlier in her presentation she had asserted that while in Practice and Training it is 90% Physical and 10% Mental it is the reverse in Competition…Amruta was an ace swimmer and cyclist and has represented India and bettered Ace Swimmer Anita Sood’s records…she has been recognised with the Chatrapati Shivaji Award too…and is now associated with an NGO and is a trained Sports Psychologist…that’s her with the team above on the field

…..the awards were given away by the new CEO,Henry Menezes (the one with the tie), of Western India Football Association (WIFA) the Maharashtra Associate Body of AIFF…daughter was also later felicitated for being the only girl from Maharashtra to have been selected for the India Womens u 16 National team and also appointed it’s Vice Captain….Fun Day

And today it was supposed to be a lazy Sunday with me being glued to the India v/s England World Cup Cricket Match from afternoon……but close friends called to meet for a quick lunch at the club…quick lasted two hours !…seemed like food prices may go up after the budget tomorrow and so we were eating as much as we could today !…… and then another close friend termed my wife as a ‘Cricket Widow’ today as she would be losing me to the match !…as if to make amends he quickly said I had lost weight !

…and now Sachin has just hit  two consecutive sixes…four in all so far for him today… and is batting on 72 and Gautam Gambhir on 46 ….India is 159 for 1 in 27 overs…India having won the toss and chosen to bat

Addendum: Sachin blazed to a century scoring 120…Yuvraj chipped in with a half century as India scored a formidable 338…England’s pick of bowler was Bresnan with a Fiver….