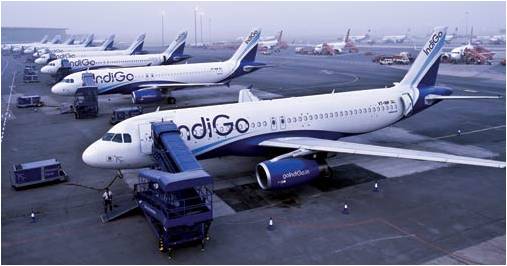 Indigo has also recently placed an order for 250 new Airbus aircrafts in 2015 which  are scheduled for delivery between 2018 to 2026.

IndiGo is  a low cost carrier ( LCC) and focuses primarily on the domestic Indian air travel market. It employs a single type of airframe and engine within its current fleet from Airbus which  helps reduce  expenses related to maintenance, spare parts, operation, crew training and labour, and managing crew rosters.

Its aircraft utilization in block hours was 11.4 hours per day per aircraft in FY14, which was among the highest of any airline in India, according to CAPA. High aircraft utilization rates are maintained by keeping a low turnaround time between flights. Moreover, the company operates a point-to-point route network with no interlining or code-sharing with other airlines for passenger traffic, which further helps to reduce turnaround time.

As of April 30, 2015 Indigo operated scheduled services to 33 airports in India, with a maximum of 593 domestic flights per day. It plans to add two to three cities every year. In 2015, it added Dimapur and Udaipur to its list.

Unlike its competitors, IndiGo does not offer a frequent flyer program, free lounges or include food and beverages in ticket price for non-corporate passengers. This further reduces its cost base.

Mr. Kapil Bhatia is the Chairman and Managing Director
Mr Aditya Ghosh is the President and Whole Time Director

SHAREHOLDERS PARTICIPATING IN THE OFFER FOR SALE IN THE IPO

Of the 18 Shareholders in IndiGo,13 are offering part of their holding for sale in the IPO.Of these 13,6 are Promoters

There  are Five  shareholders not participating in the Offer For Sale of which Four have small holdings while one Employee, Mr Riyaz Haider Peer Mohamed holds 5,110,000 equity shares (1.49% of Pre-Issue Equity). He is the Chief Aircraft Acquisition & Financing Officer of the Company. He has availed a loan from the Co-founder Mr Rahul Bhatia. The loan repayment obligations are secured by a pledge over 50% of the Equity Shares held by him. 2555000 Equity Shares held by Mr. Riyaz Haider Peer Mohamed are pledged in favour of Mr. Rahul Bhatia and on the remaining there is a Right of First Refusal. Loan repayment to Mr Bhatia is due in 2016.Thus his holding is not/cannot be offered for sale in  the IPO

InterGlobe Enterprises, the promoter group entity which owns nearly half of IndiGo,is wholly owned by Co Founder Mr Rahul Bhatia and Family.At Rs 765 his Group will received @ Rs 486 crs for the Offered Shares while Mr Rakesh Gangwal and Family will receive @ Rs 484 crs

Market share of Domestic Airlines as of Q1 FY16

A survey all over India by “Trip Advisor” following is the findings on scale of 100 percent:

The Company has made over Rs 3273 Crs as PAT over the last five years and paid a staggering dividend of Rs 2497 Crs over the same period amounting to a dividend payout of  a whopping  76% in aggregate for last 5 years.What was yet remaining it paid out in Q 1 FY 16 when it’s payout was Rs 1003 crs or 157% of the PAT of Rs 640 crs for the quarter !

It has a total debt of @ Rs 3500 Crs which is primarily for the Plane Acqusitions through Operating & Financing Leases.Of the 97 plane fleet currently,75 are on Operating Lease while 22 are on Finance Lease

A question does come to mind  ~ With an upcoming IPO why could the Promoters have not reduced Debt significantly instead of rewarding themselves with a Huge Interim Dividend of over Rs 1000 crs in Q 1 FY 16 ! which took IndiGo into negative Networth ! ? .

Of course they knew exactly what they were doing and we hope it is not linked to the fantastic FPI response to the IPO !!!

In light of Expansion Plans and Orders of 430 Airbus placed is this a prudent and wise Distribution Policy of emptying full coffers of the Airline before the IPO ? What arrogant message does it send ?

Each Airbus cost @ US $ 97 Million or @ Rs 6300 crs ….so what if it’s a sale-lease back financing structure ! Is not the sole chief object of the IPO to apply Rs 1165 crs or 91.5% of the Rs 1272 crs being freshly raised  in the IPO to repay lease liabilities and for subsequent acquisition of aircraft !

“We have conviction in IndiGo — investors have to make up their minds,” says Promoter Gangwal, adding that if it hadn’t been listed, “we would keep on declaring these dividends” in one of his pre IPO interviews.

Indigo had @ Rs 3675 crs in Cash defends the promoters when making the Dividend payment in Q 1 FY 16.True but what was the nature of this cash ! The promoters claim that the aircraft carrier has been able to meet all working capital requirements through the cash generated from operations and has not taken any working capital loans to finance various regular expenses such as employees’ salaries, aircraft fuel, aircraft rentals and charges.

So what did this Cash really probably represent !? Part of Sales!? Yes,but it is interesting to note that the Company receives non-refundable incentives from Airbus. The application of these credits to its operating leases results in a net reduction in aircraft rental payments which is amortized over the initial terms of the operating leases. As of June 30, 2015, the Company had unamortized deferred incentives of Rs 1646.67 Crs as a result of these credits.

WHY ARE PROMOTERS PERCEIVED TO BE  GREEDY ?

High Premium in IPO Pricing Band of Rs  700- Rs 765 is being demanded for a Promising Present & Future based on a Profitable Past which may or may not sustain into the Future if Aviation Turbine Fuel Prices which have halves begin to rise again.Just because IndiGo may earn in FY 16 as much as it has earned in the last five years put together is not enough justification for the IPO Pricing

This seems to be the justified Emotional Grouse of many Analysts and Retail Investors in particular but clearly not the FPIs who have lend it fantastic support.Do we interpret this as FPIs investing without a conscience or care for what can be perceived a s Corporate Governance Concern ! ?

Going Forward if ATF prices remain low with Oil under US $ 50/barrel and with the huge Expansion Plans underway in IndiGo,the Future Profitability & Growth is assured

And if Dividend Distribution Policy is maintained as liberal in the future as in the past by Promoters,it would mean Payout % of 70% of Profits => Translates to Dividend of  near 600% or Rs 60 on PAT of Rs 3000 crs and a dividend yield of over 7.5% on a Price of Rs 765 !

43 Anchor Investors,both FPIs and DIIs have already lapped up Rs 832 crs in the QIB Portion  which had already crossed 5 times subscription till yesterday evening.Thus the Issue has already been fully subscribed and closes today.However there is muted response yet in all other categories.However even the recent IPO of  Rs 1150 crs of Coffee Day Enterprises at Rs 328 saw QIB segment oversubscribed 4.38 times while both NII & RII  segments were undersubscribed .Listing is awaited eagerly

We have opined right at the start to FLY INDIGO !

The past Aviation Turbulence that led to the debacle of Kingfisher Airlines & to Negative Networths of listed Companies Jet Airways & Spicejet of course do tend to be right upfront when arguing against applying in IndiGo at High IPO Price Band of Rs 700 to Rs 765.The Promoters Greed as perceived and outlined above also adds to the negatives

If you skip the IPO,do keep a watch on listing and subsequent Price Movements