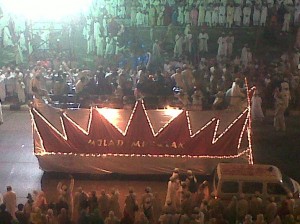 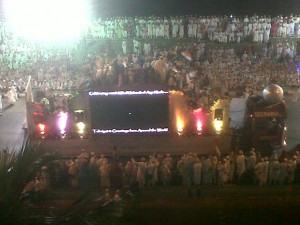 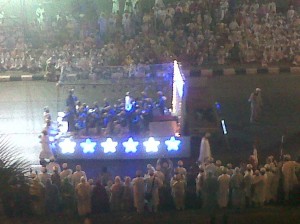 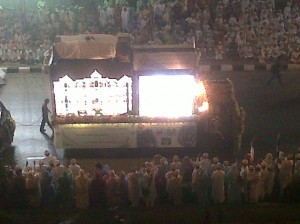 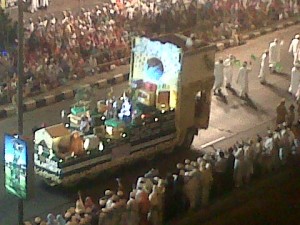 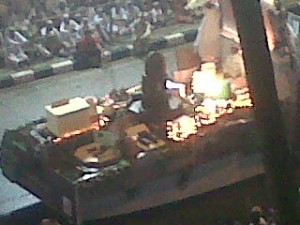 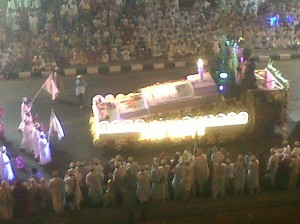 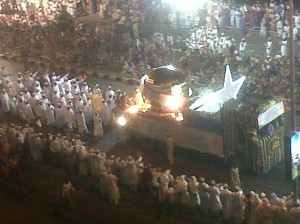 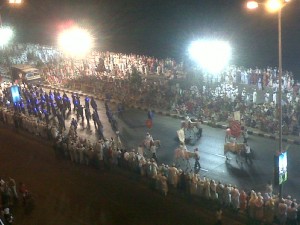 The Spiritual Leader of the Million Strong Dawoodi Bohra Community,Sydena Mohammad Burhanuddin being honoured on his 100th Birthday in a Procession down Marine Drive in South Mumbai this Sunday evening,March 27,2011….A Sea of atleast a lakh of Dawoodi Bohra men and Women and Children…the Men resplendent in their traditional three piece White outfits with a white and gold topi  while the Women in their decorative rida that distinguishes them from the traditional and simple black burkha clad Muslim Women

These are mobile shots taken by my son,who was practicing with his Rock band at a band member’s residence right in the middle of Marine Drive…he had reached early at 5pm unaware of this later evening procession and Marine Drive being closed for it

My wife too was unaware and  was stuck in a horrendous traffic jam because of this Procession…the whole of Marine Drive was out of Bounds and vehicles were being diverted through Marine Lines…she returned in a foul mood cursing that there was no forewarning ,either in the Press or on TV Channels or even through Notice Boards at leading road arteries and the big junctions that lead to Marine Drive,that  Marine Drive was  closed for vehicular traffic this evening for this Procession & Celebration…and it’s been a hot day in Mumbai today…so the Heat adds to the Heat of the Moment !

….I have warned her that tomorrow,Monday,March 28,2011, and it has been announced,the same Marine Drive is going to witness a security drill ahead of the World Cup Cricket Finals at Wankhede Stadium on Saturday,April 2,2011

….and tomorrow and dayafter too the Garware Clubhouse at Wankhede Stadium will also begin distribution of the Tickets for the Finals for those who booked and paid for them earlier in the month

Come Saturday,April 2,2011…Come the Finals…… and all roads will lead to the Wankhede Stadium on Marine Drive in South Mumbai….quicker to walk to the stadium…advisable to begin the walk early morning for the day/night game so as to be early in the Q waiting to get in …so you don’t miss the toss or atleast the first ball that will be bowled at 2.30 pm….am taking it that India is making it…….