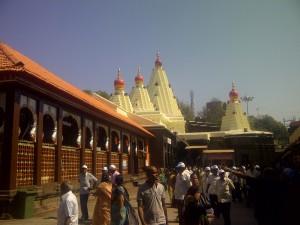 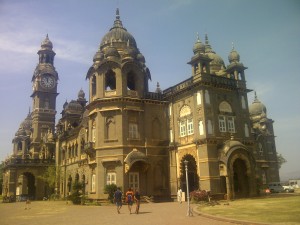 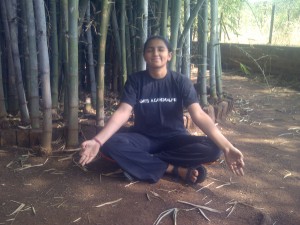 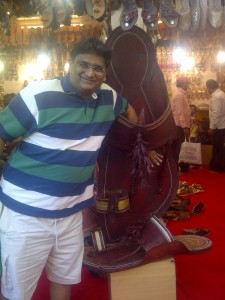 There’s More to Life than Mumbai & Money… A Saturday in Kolhapur… caught up on some Time and Life ! … have put up some photos we took

Just returned from a Saturday in Kolhapur in Maharashtra…10 hours drive from Mumbai..a bit more by Train… took the Sahayadri Express from originating station, Chatrapati Shivaji Station  (VT Station) in South Mumbai at 5.50 pm on Friday Evening and reached Kolhapur at 6 am on Saturday

…was escorting daughter to the pre Nationals State Camp… she’s all of 16 and has been appointed Captain of the Maharashtra State u 19 Schools & Colleges Girls Football Team for the 57th Schools Nationals in Port Blair, Andaman & Nicobar Islands from December 1, 2011

…and Kolhapur…. what a laid back town… Maratha & Shivaji Pride is clearly visible…. Mumbai has spoilt us for Time and Money both !… Lodges and Hotels are plenty available and range from just Rs 250 a day for a Non Ac Room to the high Rs 3199 a day for Double Occupancy in the AC Executive Room (Superior Rooms are pricier) in the three star Victor Palace… Food is reasonably priced but can be spicy… remember the Veg Kohlapuri Dish on Mumbai Menu cards !…. and Rickshaws are the mode for Local Travel and easily available.. Private Vehicles are available too on very reasonable rates as we found out

A great travelling and actually a logical tip… if you want guidance on where to stay and eat and what to see and where to shop check with the locals… our rickshaw driver from the Station, Uttam, guided us to three Hotels before we  checked in to one that cost us just Rs 600…It had no restaurant but did serve us superb tea…. After a Hot water Bath, we checked with the reception guy as to where we could have a decent breakfast… ‘Prathana’ is the place… simply walked two minutes to it…. Not airconditioned but serves great South Indian Idli and vada and Dosa and other fast food and Fresh Fruit Juices… serves Chinese and Punjabi too at Meal Times in their AC Dining hall on the first floor… then checked with the Counter guy for booking a Vehicle for the Day… Dinesh… he arranged a Sumo for Rs 1000 for 12 hours 10.30 am to 10.30 pm… Rahul was the extremely accommodating and knowledgable driver…and there’s no screaming and yelling drivers in Kolhapur…Traffic courtesy is cool with a “You First” attitude

After a Hearty Breakfast at Prathana, we first went to the famous Goddess Mahalakshmi Temple… what a heavenly Darshan… my daughter and I Prayed at the main deity and all the other Hindi deities and absorbed the Temple atmosphere for a hour and a half… truly felt blessed… was later told by my Hotel Reception Guy, Ajay with great Kohlapuri Pride that those who go to Tirupati for bowing before Lord Venkateshwara in the Tirumala Hills and then go to Goddess Padmavati Temple on the Plains to complete their Darshan must also vist the Goddess Mahalakshmi Temple in Kohlapur on their return to actually complete their Pilgrimage

…..and then it was the Palace…. The Royals yet live it one part and the Palace hoists their Orange Flag and the Clock in the Tower actually works !…..and they have graciously opened out the gardens and another Part as a Museum to the Public.. Tickets are for Rs 17 each… we spend over an hour here too… what a lovely lesson in History through the display of Rich Furniture bearing Lion heads and the Royal Insignia, Weapons that included Spears, Pistols, Cannons, Guns, Rifles, Swords, Knives, Axes and many others, Important Documents and Parchments,Photographs and Paintings that captured the grandeur of the Royal Family… there is one document from the Governor General of the British Empire in India bestowing the the Title of Maharaja to the Head of the Royal Family of Kolhapur at the time …. Hunting was a passionate Royal activity…. Taxidermy facilitated the mounting of several heads of Wild Animals as well as on display were full bodied stuffed wild animals in their original skin chemically treated for preservation… Awesome !…. and my young daughter was intrigued by the Sporting Activities even 100 years ago … there was Cricket and Football and the Royals has  a regular team…. the palace grounds boasts of a huge water body and around which there are small caged enclosures that house certain wild animals

Two conflicting emotions ran through my mind….. If we were so impressed with the Royals of Kolhapur,just imagine the lifestyles of the scions of bigger royal families like the Maharaja of  Mysore and the Nawabs of Hyderabad and the museums in those cities…. Move overseas and we can understand the crazy following that the Royal Family in United Kingdom commands

The second  emotion was conflicting….. So are our Royals living in a past era !…with the Indian youth of today really not bothered or overawed by this rich and historic legacy !… my daughter was the test for this !… while she was not as easily in awe as I was, she was certainly intrigues by how the Royals lived in the past… she spend time at the identity card of a Royal !.. more like a rich post card with handwritten name and dates !… later we sat awhile for refreshing drinks at a canteen in the palace grounds that was sheltered by  huge towering bamboo plants at the base of which my daughter sat and posed for me as if in meditation

…and then our legs were a bit weary and our stomach was signalling lunch time… our Driver recommended Opel… while going in, he amusingly called us back and stated there was indeed a really better place than this the best in Kolhapur… Victor Palace… so we went there… Charcoal Pit is the restaurant… it did not disappoint… the Veg Tandoori Platter at Rs 250 held a host of Paneer Tikka, Malai Tikka, Mushrooms, Potatoes, etc… We had a Chinese Lemon and Coriander Soup while for the Main Course we had Punjabi  Dal Makhani, Butter Naan & Lachha Paratha, Jeera Pulao and Aloo Gobi…. opposite a big Star Mall of the Tata Group is opening soon and in the vicinity there is planned a 5 Star Hotel from the D Y Patil Group.

….then the Driver suggested we do some Kolhapuri Chappals shopping which we had wanted to do… after a heavy lunch we wanted to sleep the afternoon, but decided to do the shopping…. Navbharat is the Shop in Shivaji Market… you need to really negotiate prices… picked up some lovely authentic pairs for wife, son, daughter and self

….we had to report at 5 pm at the Shivaji Stadium  for the Registration formalities for the Camp and then my daughter would stay at the Dormitory at the Stadium…. they will leave next week for Chennai by train and catch the Ship MV Harshavardhana at 4 pm on November 27 for Port Blair… it’s a 54 hour sea journey….. so we returned to the Hotel and packed and left for the Stadium… we were not amused that there had been miscommunication on the dates… we were told Saturday, Nov 19 while actually it was Sunday Nov 20 which actually now turns out to be tomorrow, Mon Nov 21 !… we checked out the Dormitory at the Stadium… Sad !…18 Girls would be cramped in a unclean room which had no matteresses yet and poor lighting and just one unclean toilet !… a  few girls had reported… we took two of them back with us to our hotel… we had two rooms booked as another dad and his daughter had accompanied us too on the Sahayadri…we two dads were returning by the same train late night on Saturday itself…. we were a little concerned to leave the 16 and 17 year olds alone for the night in the Hotel… we were reassured by the Hotel as well as the Football Coach…. next day we had made arrangements for them to be shifted to a lodge closer to the Stadium…they will stay here and not at the Dormitory during the Camp…. but first we had to have dinner and so it was a toss up between Prathana and a next door to it Thali Place called Khavayya Dining… we decided to try Khavayya… Unlimited Authentic Gujarati and Rajasthni Thali was tempting at just Rs 110 but the Girls and us wanted something lighter and so we returned to Prarthana…. our Driver dropped us at the Station at 10.30 pm last night to catch the 10.50 pm Sahayadri Express back to Mumbai… Upper berths and so promptly made the beds and crashed out.. reached Mumbai at Noon and alighted at Dadar and cabbed home rather than wait to alight at VT

And did not give one but actually got a Stock tip on the Train ! DLF !… it is now Rs 204 and the Company is doing just about alright now said the young Bengali Guy with DLF who was a co passenger on the Train… It will take  a year and  half for the Real Estate Sector to revive… and DLF Share Price should then rise….. Shakira already shook her Hips at the Birthday Celebrations in India of the DLF Doyen last week  !… Any Shakers of their Heads for DLF regaining Share Price Colours in the next year or two ! ?

I quite like the Interiors of Maharashtra…. was in Yawatmal in Vidharba District last month and now spend a Saturday in Kolhapur…. will be revisiting Pune next weekend….. so my sincere and straight from the heart advice is that if you want to catch up on Time and Life ?… then go into the Interiors of your State… there’s more to Life than Money and Mumbai !

4 thoughts on “More to Life than Mumbai & Money… A Saturday in Kolhapur… caught up on some Time and Life!”