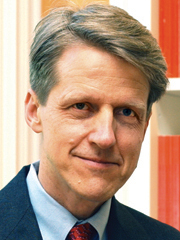 In 2005,Robert Shiller came out with ‘Irrational Exuberance’….check out My Pages…I’ve recommended this Book.He’s now come out with another bestseller…‘Animal Spirits: How Human Psychology Drives the Economy,and Why it Matters for Global Capitalism’

Shiller cocreated the popular Case-Shiller House Price Index,which is used to measure performance in this Industry.He is currently the Professor of Economics at Yale University in USA

In a recent March 2009 Video Interview at Yale,with Rik Kirland,Director of Publishing of McKinsey,Shiller cautioned on Stock & House Markets

Here’s what he said :

I think it’s really psychology that drives the stock market—and, increasingly, the market for homes as well.The problem is that it’s always a combination of psychology and reality

…..economic inequality has been getting worse and worse over the last couple of decades. And that is an alarming trend……

I think there’s a tendency, when we’re watching the day-to-day fluctuations, to think that we’re going to find some news story that’s going to mark the turnaround and overreact to that. And I think that overreaction generates the high short-term volatility that we have now. More recently, we’ve been back up to Depression levels of volatility, and that reflects the heavy focusing of attention on the market now. So I don’t know what to say about finding a bottom, except that this is a process that’s going to evolve over years. And the confidence loss that we have is a serious problem.

I don’t want to say that I don’t think there will be a turnaround soon, but I think that many of us are too much expecting that it might come tomorrow or the day after. And this volatility is evidence of that. So I think it is quite possible that the stock market and the housing market, five years from now, will be close to where they are now.

This is not a forecast; but it wouldn’t surprise me in the least if we were right where we are now. And so maybe we shouldn’t be so trigger-happy and so worried about timing the market. I guess the basic investment advice that I would say is, maybe not so much focusing on that, but focusing on getting your risk profile right, getting the exposures so that you’re not overexposed to any one risk—you’re properly diversified, you’re hedged against specific risks that phase you