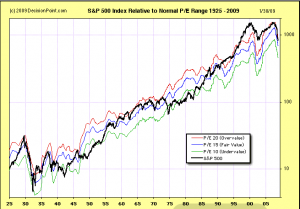 Clearly 1990s and 2007 was overvalued….late 1940s to early 1950s showed PE levels below 10…From mid 1980s till date the PE Levels have remained over 15 in expectation of Higher Earnings Growth….Now with deleveraging and Lower Earnings expect the PE to be derated back towards 10 and even below to match the changing perception of Fair Value at a lower PE Level of 10

If Panic sets in,then macro valuations are ignored and Sensex and Nifty will nose dive breaching even perceived as Fair PE Levels of 10

However there is some hope……India and China will continue to register higher relative growth rates,albeit lower than in previous years and may not be impacted going forward as much as US Stock Markets in the longer term…In 2008 ofcourse both these Asian markets have been decimated

BottomLine is to exercise Caution and not be in any hurry to average Equities or initiate fresh buying…Top Down Approach gives strong warning signals…a Bottom up Approach may be more rewarding…ofcourse the challenging times have thrown up disinclination to buy equities and an anti equity sentiment…so it gives you adequate time to contemplate equity strategies to restructure,rebalance and reposition equity Portfolios…you are not going to miss any boat if you don’t buy today !