Is it worth working 20 hours at a stretch day in and out even if young!?

The reason for his death is yet to be out but this young man was fed up of burning the midnight oil day in and out and had actually resigned only to rejoin….a sad and bad decision that probably resulted in his death….he was stressed out totally

Reminded me of  the Motivational Author Robin Sharma and his bestseller ” The Monk who sold the Ferrari”….a hot shot lawyer who gave it all up

I put in long hours and even slept a few nights in office in KPMG in the Middle East in the 1980’s to complete work which had tight deadlines…..I was in my 20’s then.It seems like a different era then .

A 20+ year old  working round the clock today has his Life clock ticking faster !

It’s not worth it

Do pay heed to this 30 second guidance from  the ex CEO  of Coca Cola,Bryan Dyson which I have carried as a page post on my blog for years 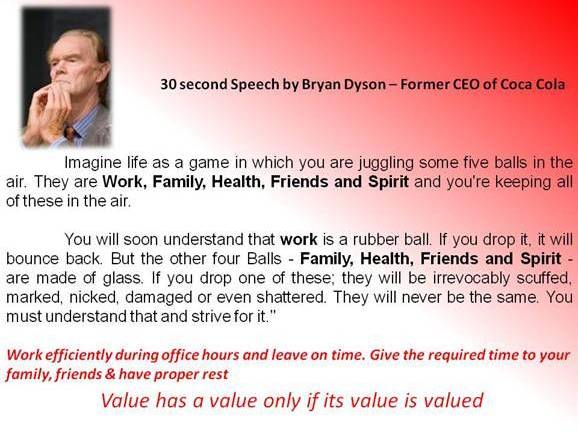