Yesterday,BBC had them on their Channel…and I was a keen viewer

Sherron Watkins was on HardTalk…She was the Vice President of Enron and in 2001/2 had sent a very detailed email to her Boss, Kenneth Lay,detailing the Accounting Frauds in Enron and warned that Enron would implode…Time Magazine made her the Person of the Week in one of their January 2002 issues

She lives in Houston and made a few very candid points yesterday…She feels there is no Shame in America,like there is in Japan.Shame is a great Motivator.In America,those who commit frauds are not ostracised and people accept them because they are moneyed…”Oh ! he has US $ 700 million…Wow !”…On being asked did she yet believe in the American Dream,she said it stood on three pillars…Economic Freedom,Political Freedom and Moral Responsibility…the problem is lack of moral responsibility…did she yet believe in Democratic Capitalism ? Well, she says,the Chinese have been telling her lately that “Watch it ! Communist Capitalism will be a greater success !”

Later BBC interviewed another very interesting lady…Anousheh Ansari….This Iranian-American is the first woman tourist to go into space to the International Space Station 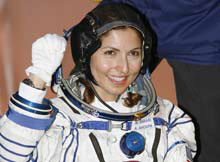 Ansari flew into space on September 18,2006 travelling in a Soyuz TMA 9 Spaceship that took off from the Baikonur Cosmodrome in Kazakhstan…Oh ! and she’s the first to blog from Space !

Yesterday,she again regaled the thrilling experience…Was she scared ?…Even If the ticket to travel into space was her “Life”,she would willingly have paid it !…Earth is beautiful from space and she wishes that Space Travel be made more affordable so that many can fly into space…Once they see Earth from Space,the beautiful image leaves a lasting Impact and they would not do anything here on Earth to harm their Planet !…In lighter Vein, she says,it should be mandatory for Presidential Candidtates to travel into Space first to view Earth