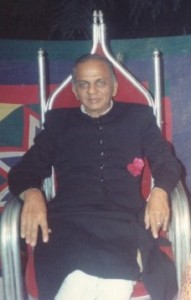 Dad,Aroon, would have been 85 today ~ An Epitome of Always being Upright & Content & Humble ~  and ‘A’ in  both Name & Spirit

Dad’s Life was IndianOil who he served loyally for @ 30 years having helped set it up ~ Earlier in the 1950’s he was with Standard Vaccuum that was renamed Esso and which we finally know as HPCL today ~ A Decade into Post Independence,India set up IndianOil and Dad sacrificed his multi perked MNC Job to patriotically join the fledgling IndianOil  and was initially responsible for setting up West Zone,travelling three weeks in the month….he rose through the ranks donning various roles in Marketing,Supply ,Distribution & Commercial

He was incorruptible in a Sector where Corruption was easily induced and even became a norm where Hundreds of Millions of Dollars of Oil & Gas Trade &  Supply & Distribution Contracts &  Petrol Station Licensing was involved !

There were several instances,some really high profile,which I can easily recall, where he has shunned millions offered to show bias and favouritism despite great pressure ~ I used to joke with him “Dad if you had ,we’d be staying in Switzerland!” 🙂 …and he would just smile contently

….However all the pressures indeed had taken a toll on his health…after three strokes at Age 38,48 and 58 he passed away on the fourth at Age 68 in 1998,ten years after retiring from IndianOil in 1988 and refusing to take lucrative Consultancy and representative Offers from Foreign and Indian Private Oil & Gas Majors like many of his colleagues did

….he was the happiest when IndianOil gifted him a HMT Watch for 25 years of service and he could never understand how post modern reforms in early 1990s young finance professionals were getting salaries of lakhs in months and years when he received just two lakhs or so as pension on retirement…though he never grudged this read more