We are Truly Blessed !….What an Exciting & Proud & Warm & Special Saturday it was yesterday !

Heartfelt Thanks to all of you for your continued Prayers ,Best Wishes and Blessings for my Family and me…believe me, these count big time !…I pray you’ll continue to have us in your Prayers

Family is Thrilled and Proud of the 16 to be 17  year old later in the year  Daughter scoring high in ICSE….considering that she was out of School on India Football Duty as Vice Captain and Goalkeeper of the India u 16 Girls Football team for long periods aggregating nearly Four Months in 2010 and then as Maharashtra State Captain of the u 19  Girls Football Team for the Schools Nationals in Port Blair in the crucial closing Months of 2011 just before Std X Preliums…even when she returned to Mumbai in December 2011,her mind and heart was left behind in Port Blair where she held the State Flag as Captain (see picture below) and took them to the Semi Finals against all odds…took her a full week to get back into the study groove and mode

…I had told her Percentages are not really important in assessing a Person…what is more defining is Character,Personality, ‘being human and humble’ and being on track with the right values…being caring and compassionate….being mindful of the Planet’s Environment…..  and not ‘pulling’ someone down to ‘pull’  yourself up !…you’ll then have earned and commanded, and not demanded, the respect of  all….they will  genuinely share your happiness too in your achievements…thus adding more shine to these for a more meaningful existence…..so even if she got 75% or 85% or 95% it really would not matter to me !…as parents we have not sat with her for one minute to teach or take up her Studies in the past two years,though we kept offering to do so ! …and as parents,we were touched when a few parents told us that she was not only the icon of their children,but theirs too !

She wants to make a Difference in many ways…she had even found time to move away briefly for a weekend from Mumbai to Badlapur where she stayed and taught at a School Orphanage…In Mumbai too she is involved with Interact,where she often has to go to Municipal Schools and teach young underprivileged and poor chbildren….she continues to inspire me !

http://www.indianexpress.com/news/bombay-gym-womens-football/950432/
http://www.expressindia.com/latest-news/bombay-gym-womens-football/950432/
http://www.afternoondc.in/sports/sports-in-brief/article_55777
She has already commenced ISC Std XI in the Science Stream….However, We are made to understand that,should she choose the State’s HSC  Stream, she would be entitled to 25 additional marks for her representing Maharashtra and India in Football…if this is so,this would make her a City Topper !

In April last month she received the School Alumni Prize for the Best All Rounder of Senior School Std X at the hands of the MD of India’s leading Private Bank ~ see Pic below~ as well as special mention in the Principal’s Speech for being the ‘golden girl’ in Football who humbly and brilliantly balances distinction in Academics and Sports and Extra Curricular Activities…and how difficult it really is for a student to do this…..our eyes moistened when the Principal said this…. 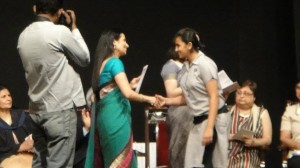 Darling Daughter ,continue to remain humble while Moving Ahead and not resting on past laurels…..and you’ll keep making a wonderful Difference….Love you Lots

…and Oh ! Yes… keep strumming that Guitar and humming your songs like below  !

…. and simply continue  sketching those soulful and priceless pencil drawings,like the sail boat and lighthouse below which even has your baby photo is superimposed !

We are truly Blessed !

6 thoughts on “What an Exciting & Proud and Warm and Special Saturday !…Daughter Scores a Distinction @ 94% in ICSE Std X and Captains the Bombay Gymkhana Women’s Football Team to a Win in their First Match”