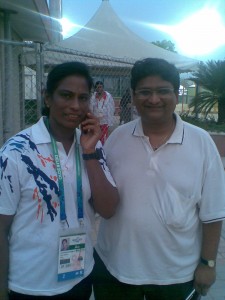 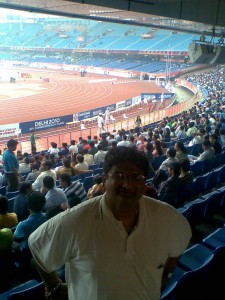 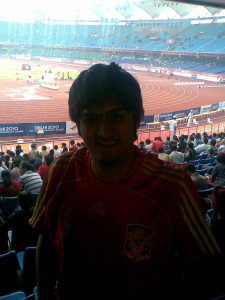 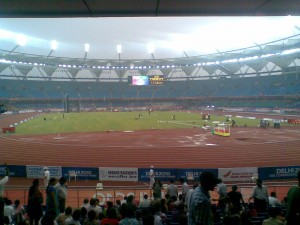 ….however the inside of the Stadium is awesome….Live TV can never replicate or capture the Live Aura and Live Buzz of a Lively Stadium…..even though the stadium was not full the buzz was infectious…..we had to leave soon to catch our flight…..we were impressed….but were told my a spectator who had attended the Opening Ceremony that the Crowd Managment outside was disastrous then…Rs 50000 Ticket Holders were in the same Q as those holding the minimum Rs 1000 tickets….Children and Women were being trampled and pushed and it took Two and a Half hours to just get in !….the Organising was simply awful….when I told this to a Delhi Friend,she said “Yeh hee Delhi hai meri jaan !”….Most of Delhi is least bothered about these Games…they have been poorly planned,poorly managed and poorly marketed….even the Airport had no Commonwealth Games Booth for Information or Merchandise Sales….The Flags and Banners on some routes were valiantly trying to spread some CWG Cheer and Spirit…..Tourists from overseas were spotted few and far between….one would have expected they would swamp New Delhi for these Games…..clearly seems the huge and sustained anti Games Organising media hype the past few months has been successful in keeping some top athletes from participating at these Games as well as overseas visitors   read more