After a lovely late night…read earlier blog….got up early at 6.30 am for the Sunday Morning Massage…later at 8 am saw our 18 year old Saina Nehwal enter the Round of 16 in Badminton winning her second round match against a Ukranian Opponent in straight games at 21/18 and 21/10..she’s really in great form and is blooming under the Tutelage of Gopichand in Hyderabad…If you recall Gopichand also emulated Prakash Padukone when he too was crowned the All England Open Champion

Moments later saw our Ladies Archery Team, who were sixth of Ten Teams selected for today’s rounds,lose a close battle with China…It went to the last Arrow with China slipping into the Semi Finals 211/206 at our Cost

Anup Sridhar, our Men’s Hope in Badminton, plays his first match later this evening ,against an opponent from Portugal and is a favourite to win 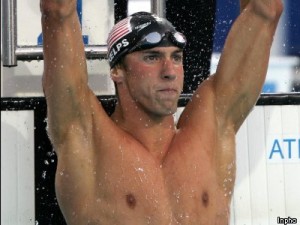 …..And US Sensational Swimmer, Michael Phelps, bagged his First Gold in his quest for Eight Golds this Olympics… He won the 400m Individual Medley in a World Record Time of 4m 3.84 sec… he broke his own Record…. he hopes to better Mark Spitz’s Seven Golds  in the Munich Olympics in 1972

And just some advice to DD Sports… Thanks for the Live and Deferred Live Telecast… but can you cut out local commentary… and more important… whatever you show, can you please show it to the end… Just as the Olympic Flame was to be lit…you blacked out…. luckily we switched to another Indian News Channel that was also showing it Live…yesterday you switched from Cycling just as the 200 kmEndurance  race was in it’s Final Km !… also you switched from Boxing in a close match just as Final Round 4 of Two minutes was to begin !