On the back of a  fantastic Mumbai Workshop on Saturday,June 17,2017 here’s another opportunity to invest the first Saturday in August 2017 with me ! ~ especially for those who could not make it or could not be accommodated as Registrations had closed within a week of opening ~ expecting a few repeat participants too ~ what better endorsement could there be ! ~🙂 While you can call it an Encore ,this time in this Stock Selection ~Value Vs Price Workshop have kept another exciting Theme to spot & assess both Long & Short Term Opportunities in Equity :

Here’s some fresh feedback from participants of the very recent June 17,2017 Mumbai Fundamental Workshop on Stock Selection : Value Vs Price~ Wealth Destroyers : Potential Multibaggers where we conducted Macro & Micro Earnings & Asset Basis Valuation exercises & more & even played an animated Corporate Tambola !  ~ Some participants came in from Dubai,Malaysia,Delhi,Cochin & Ichikaranji too ~ & what a lovely & lively Mix from retail investors to HNWI market veterans & professionals from FPIs,Fund & Broking Houses & Institutions ~ spread in age from early 20’s to the 60’s

“indeed a great learning & educational experience….totally luv your analysis of stocks….looking forward to the next one” 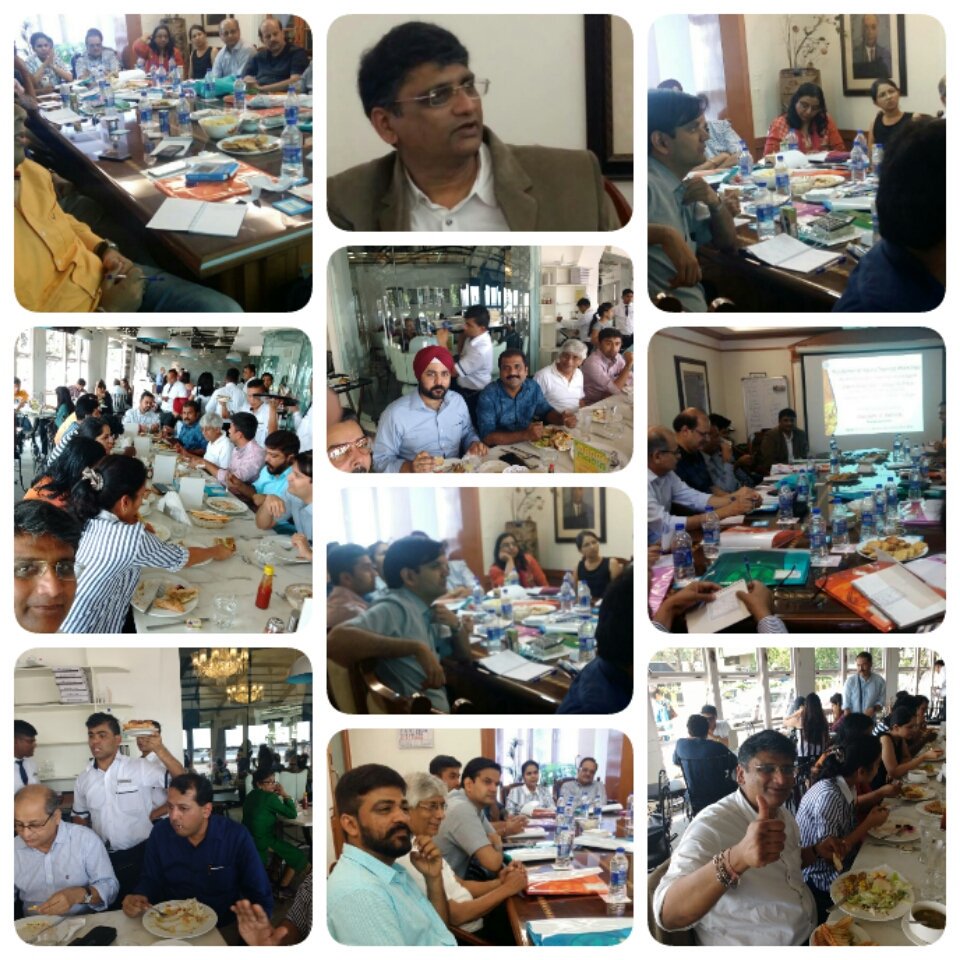 It was a wonderful Saturday for all of us ~ a Full House ~Time just Flew!

The Mumbai Equity Workshop on Wealth Destroyers having the Potential to bounce back kicked off at 9.30 am stretched into 7 pm…began with a Tambola or Housie where they had to guess the Wealth Destroying company on the questions posed & strike off the name if it’s there on their Ticket…In fact each pulled out a question & posed it for all…Prizes for Jaldi 3 & Two Full Houses & a question Bank on 25 companies…like “Chor ! Chor!” & they got it ! ~ Kingfisher Airlines ! or Ethopian Counsel yet destroyed his Company  &  promptly the answer shot back “Karuturi”! Chocolates were given for each correct answer too while I spoke a minute or two on each company & how it was destroyed & whether it can revive

Tea & Coffee & a variety of Cold Beverages & Biscuits & Wafers were served through the day & we had to switch from a Copper Chimney Lunch Buffet arranged to a Soup,Salads,Sandwich & Desserts Buffet at Pizza By the Bay as the former’s kitchen had grappled with a fire the previous day & was closed on Saturday

Must Thank the Full House with Participants coming in specially from Dubai,Malaysia,Delhi,Cochin & Ichikaranji too…there were a few repeats from earlier workshops in Bangalore & Mumbai ~ take that as a thumbs up!…gratifying that within three to four days days of announcing this workshop end May 2017,it got full…surely Sensex at 31000+ and climbing has something to do with this ! 🙂 read more

On December 6,2013 following on a blog reader Dinesh Sampat’s request I had posted the warning below with elaborate reasoning:

Planning a Training Workshop that has a classic Theme for such low priced Wealth Destroyers & how & when to spot a turnaround & take the risk,if indicated  ….should announce it shortly

Do not get seduced by low below par quotes & a mindset as “what could go wrong…the down side is limited !”….you’ve already been foolish in Global Trust Bank  (vapourised) & Kingfisher Airlines(suspended but as good as vapourised) just to mention a few black sheep

This Thought was inspired by a Whatsapp Forward received this morning titled Power of Equity .It listed many Life Changing Wealth Creators that grew many fold from just Rs 10000 invested in each  & carried a concluding Message in Capitals ” INVEST WISELY WITH LOTS OF PATIENCE “

This was the List & I’m assuming the Years & CAGR Maths is correct with Dividends not being considered :

Cannot Argue with this Message for I’ve seen three of my Scrips,in even relatively quick time inside five years of investment too becoming over 100 Baggers ~Matrix Labs( early Millenium & now delisted as sold to Mylan),Mercator(early Millenium) & WIPRO ( from 1997 to  early 2001)

It is rare for most investors to live the Conviction & Temperament to hold for long & ride the Huge Life Changing Gains.Imagine if more than Rs 10000 had been invested in each of the above,especially WIPRO!

However my Thought is what about Wrong Convictions on the High Fliers that became Wealth Destroyers &  Life Maimers !

Here are a few of them ,most yet listed & struggling to revive & how much worth would your Rs 10000 invested in each of them be now ….most are Horror Stories of the past decade or a little more…sure you can contribute more…My Horror Stories  have been the Damania Group’s Damania Capital Markets to mention one.Bad Judgement Call that Cost!It was compulsory delisted in July 2004.

~Suzlon -2005=>Rs 842  &  2008=>Rs 348 ! => 92% to 97% wiped out after considering 10:2 Split in January 2008 when it reached an all time high of Rs 2300 before split.Current Price Rs 16.Promoter Tulsi Tanti is yet on board though Dilip Shanghvi of Sun Pharma Group has acquired a major stake in it @ Rs 18 in February 2015.Mandatory Open Offer at Rs 18 to other Shareholders in January 2016 met with no success.The Share Price had raced to Rs 30 from where it has halved & is below the Open Offer & Stake Price of Rs 18.Shareholders hold out Hope of Revival back to Glory Days in the years ahead under Dilip Shanghavi.So far it’s been a muted share price trading range in recent months.

Now Children have been uprooted with Centres being closed overnight

I had blogged extensively on this debacle over a year ago on November 27,2015 with specifics on how there appeared to be cloudy money payments & accounting jugglery in the accounts.My Training Sessions cover TreeHouse when discussing Corporate Governance & Interpretation of Financial Statements when assessing Value vs Price

Did not the  FPIs,Private Equity Funds & Venture Funds question this when investing Hundreds of Crs in the Company….and how did Independent Directors & Auditors allow all of this….& how did all such risk miss the eyes of many a Fundamental Analyst when recommending this for Investment !!!

They had raised similar suspicions in 2015

Message Boards of Stock Portals went ballistic on Tree House last two years with many supporting a turnaround at Rs 150 & Rs 200 levels that it had dropped to end 2015 from Rs 550+ levels.Either they were paid stooges or simply living in Hope in the Squeeze of a Boa Constrictor.2016 actually tightened the squeeze leaving shareholders gasping for breath,dropping from Rs 175 levels beginning of the year to now just Rs 24 & falling.There’s a cloud on the merger too with Zee

And just look at this ironic Shareholder data !

Clearly Many Investors love standing in front of a Speeding Train ! ~ The Faster the Speed of the Fall the More Join in to commit suicide ! ~ Living in Hope only to Die in Despair ! ~ Sadly most of them could be Retail,sucked in by Positive Views on MessageBoards & by Experts on  Stock Portals & Channels

Earlier in 2013 I had lamented & even loudly warned on the blog (Checkout Category Kingfisher Airlines~ Machiacellian Mallyas) ,in my Forum Speeches & Training Sessions that over 240000 shareholders of Kingfisher Airlines should critically revisit their Investment before it was too late as to me it was simply an Airline that never really took off ! ~ Shareholders remain Holed up in a suspended scrip (last restricted trade was just Rs 1 in June 2015 when it was finally fully suspended even from restricted Trading after initial suspension from December 1,2014 ) while the Promoter Mallya is holed up in London ~ Tagline of my Blog “In India,Companies may Fall Sick but Promoters rarely do!” read more