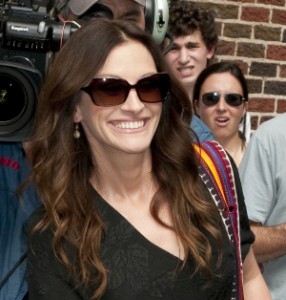 “India is a Spiritual Mecca”…. Wow !… in just one brief observation, this Catholic Born, ‘Pretty Woman’, and  Hollywood Star, Julia Roberts, has combined Hindusim and Islam….

Roberts, now says she’s a “Practising Hindu”….. “I’ve been so spoiled with my Friends and Family in this Life. Next Time I want to be just something quiet and supporting”… she clearly wants to live a more Peaceful Existence in her next incarnation.

Just for the record, a few years ago, Roberts was the highest earning Hollywood Actress… she grossed over US $ 20 million in a  single year…. and just for the record it has just been announced that Sandra Bullock has grossed the highest for 2009… US $ 56 Million… beating Reese Witherspoon and Cameron Diaz by a long shot

And Just for the record, and if it does interest anyone, I’m born a Hindu but am a ‘Practising Secular’!… and don’t earn such Millions !